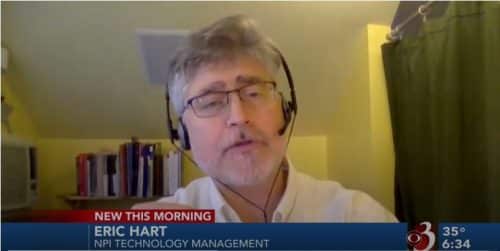 BURLINGTON, Vt. (WCAX) Zoom is just one of many teleconferencing platforms, but it’s the one that’s gained the most popularity and criticism in the wake of coronavirus. Now, some local experts are saying people and companies may want to step away from the platform.

“They’re doing their best to resolve these issues as quickly as they can, but these are issues that have existed all along,” said Eric Hart with NPI Technology Management.

What’s now known as Zoombombing is sometimes like a prank, people enter Zoom chats and put up image like pornographic image. Other times, it’s more malicious like racist slurs and misogynistic outbursts.

Hart breaks Zoom’s issues into three categories — security flaws, the sale and use of private data, and how participants implement product features.

Both incidents happened after members shared the Zoom links publicly.

“The bulk of this is really pretty simple, and it’s being done because folks aren’t taking advantage of the security features that Zoom and other products offer,” said Hart.

“It is possible for somebody with specialized software to essentially try all the possible combinations that would make up a Zoom meeting ID, and this software will discover approximately a hundred non-password protected meetings per hour,” said Hart.

And Hart says many are posting that information to online platforms like Reddit — inviting people to disrupt. It’s for these reasons, Hart recommends healthcare providers, nonprofits, and educational institutions steer away from Zoom and instead turn to software like GoToMeeting and WebEx– which share the similar functions but have less history of hacking.

“Both of those products have been around much longer than Zoom and have worked through some of these privacy and security issues,” said Hart.

And right now, they’re free for most organizations. But if you choose to use Zoom for public conversations, Hart suggests utilizing a waiting room feature. Only those who the host has admitted into the meeting can access it.

As for the Senate and Burlington School District, they say they’ve learned their lesson, though are staying on their toes to plug holes as they pop up.

“Only a fool would say it won’t happen again because it’s like Murphy’s Law, but I’m confident that the chance is low and we’ve taken steps to make it less and less likely,” said Vermont Senate President Pro Tem Tim Ash.

“The systems we have now are pretty secure and pretty safe, and we’ll have to rely on those and deal with situations as they come up,” said Superintendent Yaw Obeng with the Burlington School District.

Many school districts and businesses are relying on Google Hangouts and Microsoft Teams now.

Hart believes the shift to telecommunication will radically change the way companies and organizations connect and collaborate, so it’s important to pick a software now that’s suitable long-term to continue using the tools.